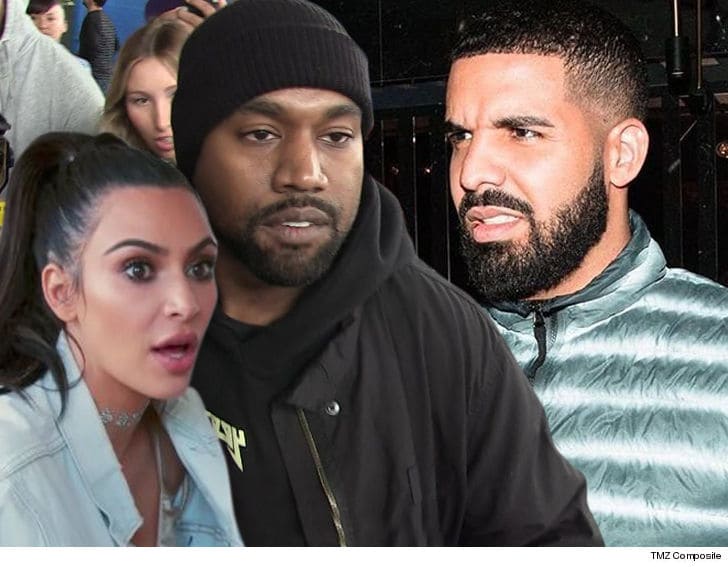 Kanye West was back at it again with his most recent Twitter rant, adding more fuel to the flame of his beef with Drake.  According to People, Kanye had twitter fingers posting countless tweets saying that Drake called him and threatened him.

Kanye said, “So Drake if anything happens to me or my family you are the first suspect so cut the tough talk".  Kanye also tried to insinuate that Drake was behind an incident at Pusha T’s concert. Ye said, “The kid he [Drake] had run on stage at Pusha’s concert is in critical condition.” During Pusha's concert in Toronto, the audience rushed the stage and threw drinks of some sort on Pusha.  The crowd was violently pushed back and one of the concert goers ended up being stabbed multiple times during the chaos.

Kanye had many other things to say. Wife Kim Kardashian also joined in saying, “Drake never threaten my husband or our family. He paved the way for there to be a Drake.” TMZ reports that Kanye posted a screenshot from his phone of someone from Drake’s team trying to clear one of Kanye’s songs for a project.  Ye felt that Drake had been sneak dissing him on other songs and, to top it off, was trying to get clearance to use Yeezy's music.  That allegedly didn’t sit well with Ye.  Drake called Ye to talk and that didn’t go well either!  Hence, the most recent Twitter rant.

TMZ caught up with Tyrese to get his take on the beef that aired on social media.  Tyrese didn't have too much to say, but he did however leave TMZ with this comment...  "Take it from me, handling sh*t on social media when you're beefing with somebody is not always the smartest thing to do.  They [Kanye and Drake] live literally 2 blocks from each other.  They both live in Hidden Hills. They putting sh*t on social media when they live that close."  Take it from Tyrese... He definitely knows best!  The two rap phenomenons have reportedly been beefing up their own securities.  Just cut the crap and have a sit down and squash this.  PERIOD!