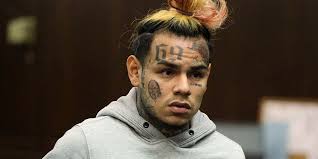 RapperTekashi69 has entered a “Not Guilty” plea along with being scheduled a September 4th trial date.  As you may or may not know, Tekashi was arrested back on November 18thon Federal charges which included racketeering and firearms charges.  ATF also grabbed his ex-manager Shotti.

According to TMZ and the legal docs they obtained, Prosecutors said that back in April, Tekashi was waiting in a car outside of a NYC office building and was recording while Tekashi’s manager and others in his camp robbed some of Tekashi’s rivals.  There was another incident where Tekashi was present when someone from his entourage fired shots at another vehicle.

There was also another incident in July where Tekashi is being accused of ordering a hit on one of his rivals which led to someone being shot in the foot.  TMZ also posted a picture of an AR-15 style rifle that was recovered from Tekashi's Brooklyn home.  He’s already been denied bail despite his attorney Lance Lazzaro’s proposition that Tekashi be released on house arrest after paying the court $750K and surrendering his passport.  The judge wasn’t buying it.  So, he remains in custody.  They recently transferred him to another facility for security reasons as reported by TMZ. This facility is said to house informants.

Tags: tekashi69
E-mail me when people leave their comments –
Follow